The latest house price reports from Halifax, Rightmove, Zoopla and Nationwide all tell a similar story - house prices are up.  We believe things will settle down.

The Halifax House Price Index for September 2020 shows that, on a monthly basis, house prices in September were 1.6% higher than in August.

This trend is repeated in the latest quarter (July to September) where prices were 3.3% higher than in the preceding three months (April to June).

Taking a longer view, Halifax reported that house prices in September were 7.3% higher than in the same month a year earlier – the strongest growth since June 2016.  Halifax also commented that "few would dispute that the performance of the housing market has been extremely strong since lockdown restrictions began to ease in May. Across the last three months, we have received more mortgage applications from both first time buyers and homemovers than anytime since 2008. There has been a fundamental shift in demand from buyers brought about by the structural effects of increased home working and a desire for more space, while the stamp duty holiday is incentivising vendors and buyers to close deals at pace before the break ends next March."

Rightmove and Zoopla both reported stronger asking prices too.

Rightmove's latest reports show the price of property coming to market up 0.2% in September.
Three and four bedroom houses attracting family movers hit a new national record price of £291,618 as buyers look for larger homes after lockdown.  Sales agreed compared to this time last year  were also stronger for larger homes – more than doubling in the largest ‘top of the ladder’ homes sector (+104%), and growing strongly in the second-stepper sector (+55%)

National sales agreed for the whole year to date are down just 5% on the same period in 2019, with the South East (+1%) already ahead.

Zoopla reports on the problems facing first time buyers, where mortgage lenders have restricted 90% loans and want to see evidence of a saved deposit.

Zoopla's analysis shows that whilst First-time buyers have been the driving force of the housing market for the last decade - supported by Help-to-Buy and greater competition amongst lenders in the 90%+ loan to value mortgage market - Covid-led measures are starting to impact the scale of first-time buyer demand and their ability to purchase a home.

Latest figures from Zoopla show that, despite a spike in demand amongst first-time buyers when the English housing market reopened after a 50 day closure on 13th May, FTB demand has trended downwards over the last two months and is now back in line with pre-COVID levels. 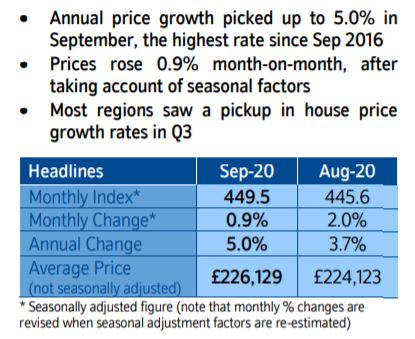 For once, all the indexes broadly agree with each other.

The Nationwide reports annual house price growth of 5% amidst strong demand for mortgages, with 85,000 mortgage approvals in August alone, the highest figure recorded since 2007.

Nationwide also provided some interesting insight into buyer behaviour, with people's outlook varying significantly, depending on their Covid outlook and personal circumstances.  Less than a fifth of those surveyed by Nationwide who had been planning to move pre-Covid, had put their plans on hold.  Of the would be movers, 10% of those interviewed told Nationwide they were moving as a result of the pandemic, and a further 18% were considering a move for the same reason.  So it's a market of two halves, to use a football analogy.

The stamp duty holiday has certainly given the market a strong kick.

We strongly advise anyone thinking about a move and wanting to take advantage of the stamp duty break to get a move on.  Transaction times have lengthened as solicitors get bogged down with an unexpectedly high volume of cases.  The stamp duty holiday ends on 31st March 2021.

House prices clearly cannot keep rising at this rate.  At Trigg & Co we see it as a short term result of post Covid supply and demand, together with the stamp duty rocket booster.  We believe the market has already started to calm down, with local prices stable and buyers and sellers being realistic.  It looks as if Covid is going to be with us all for a while yet, and any further lockdowns and restrictions will only slow down deals and moves.  Our advice is unchanged - attractive, well priced houses sell well in nearly all markets conditions and we don't see further great price rises - or big price falls - ahead.

Would you like a FREE VALUATION??  Just give us a call or book online right now!